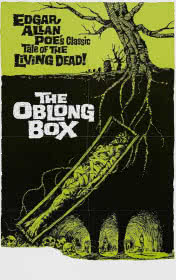 Typical of mystery stories of the Victorian Period. The narrator is an observer to the main action, while trying to solve the mystery of the oblong box. The reader follows the narrator’s view point as he makes assumptions and finally learns the truth.

For the most part this is a short and captivating read. Which once more can be read in 1-2 hours.

The narrator is on a sailing trip from Charleston to New York. Aboard is a friend of his, an artist named Wyatt and his entourage. A very inquisitive unknown narrator tells the story of his voyage, which happens again in a Edgar Allan Poe tale.

Baffling right from the beginning with a delayed voyage, a mysterious box, strange nightly noises followed by muffled sobbing, and then dead stillness.

At first it seemed like a detective story with a touch of supernatural. But it turned out to be of a completely different type. Even though this one is predictable.

However this tale dont feel like the typical work written by Edgar Allan Poe. Because instead of the foreboding atmosphere of horror, this felt more inquisitive.