Ive have actually last month decided to rewatch the house of cards series. Ive loved the first 4 seasons of this show and I’ve been watching the show way before all these Kevin Spacey sexual abusing claims. So I began to rewatch the whole show and Ive realized a big thing which is sort of, the main theme in the show. For you information this post will have a lot of spoilers. 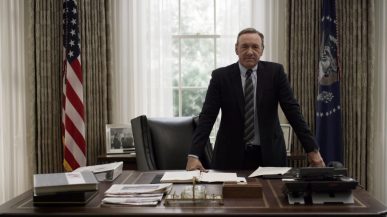 We who have seen the whole show, know that it is more or less about Frank being all about the power and him doing anything to become the president of USA. But here is the thing (as we have talked in the past two posts about politics) we know that the real  power lies in the congress. So if Frank is really all about the power he shouldn’t run for the president office, but rather stay in the congress. But of course he would need to work with other congressmen and women to get his goal done.

But on the other hand, a lot of more people will listen to him when he is the president but he wouldn’t have less power than the congress have.

We all know that Frank is a sociopath, but he is also smart as fuck. And his manipulation skills are high as it could be. But if we long at the list of president in USA we will see that USA had a president which was in couple of ways similar to Frank. The president I’m talking about is Lyndon Johnson who was the 36th President.

Frank and Lyndon Johnson both came to the Presidency in some controversial circumstances and both are relentlessly pragmatic. For the record I’m not accusing Lyndon Johnson or anyone of anything. Im not saying that Frank represents a particular president or any other person in power.

When it comes to Bill Clinton who was the 42nd president said in some kind of interview “Kevin, 99 percent of what you do on that show is real.” Which can mean that every president have more or less used similar or even the same strategies that are being used in the series.

I think that modern politicians who might influenced the creation of this character are no other than Tom Delay. He is best known for running the House Republican Conference with his ruthless iron fist as majority whip. Both Frank and Tom Delay political conservatives with one main difference which is Frank being a Democrat and Tom Delay being a Republican. The other main difference between these two are that Tom Delay had seemed to truly believe in his politics and party while Frank treated his party as a tool to get the president office.

The whole point with this post is that I wanted to really point out that Frank was power hungry and choice to be president than stay in the congress.